There are multiple species of termites present in our tropical climate. Fortunately not all species are of concern to the home owner or building owner, as some of these species tend to live and feed outdoors only. However, where termites operate indoors, that is where they cause huge problems where entire parquet flooring areas or wooden panels can be eaten hollow by a voracious colony of termites. To understand termites control in the home or the building, it is important to understand the different types of termites. For ease of understanding for everyone, we will loosely categorize the termite species into outdoor and indoor termites.

Outdoor termites include Globitermes, Nasutitermes, Macrotermes and sometimes Coptotermes. When operating outdoors, these termites typically attack trees and build mounds as their nesting grounds. This poses little impact to the homeowner, as the termites are part of the natural ecosystem that breaks down organic material that then serves to fertilize the soil in the gardens or landscaped areas.

Where such termites attack a tree, the tree in question can be removed for safety reasons, or treated if it is a tree that the homeowner wishes to safeguard. Such tree treatments involve a chemical application that can come with a short warranty depending on the lifespan of the chemical used. For more details on how to identify each termite species, you can capture a specimen or engage a reputable pest management company to do a site survey.

Indoor termites include Coptotermes Gestroi, a highly destructive species of subterranean termite, as well as Cryptotermes, a less destructive species of drywood termites. These species can be loosely classified as indoor species as they tend to feed on wood and cellulose sources indoors, this despite the subterranean termites having their nests deep underground outdoors. Of the two species, the drywood termites are more harmless and we will therefore discuss these first.

Drywood termites typically are found within wooden furniture, or wooden fixtures such as built in cabinets or paneling. The entire colony lives within these wooden items, and the nests are not connected to the ground. Colony size typically is small within 10,000 members, and their rate of feeding is also relatively slow. Typically identified by their droppings which look like little pellets of “wood dust” (in industry terms, this is known as “frass”), drywood termites are rarely seen on the surface. The tell tale sign is the presence of the pellets, especially where the pellets reappear after cleaning off the previous batch. 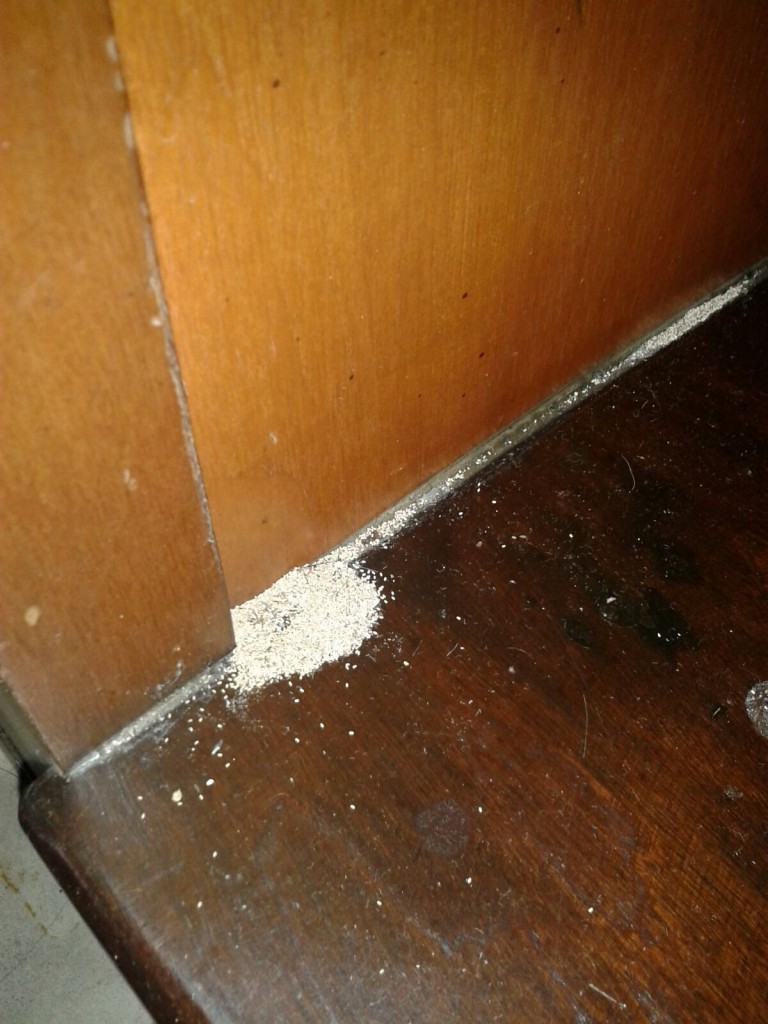 Treatment of drywood termites can be a tricky business, since there is no way to access the colony without permanently damaging the particular piece of wood. For moveable items such as furniture, a fumigation of the item or an intensive heat treatment can be done. That has a good chance (but not a 100% guarantee) that the colony will be eliminated, depending on how well the treatment penetrates the item. Typically though, most pest management companies will offer a spot treatment via a chemical spray, liquid chemical injection or powder application onto the boreholes through which the termite droppings fall out of the wood. This allows the chemical to potentially kill off a number of the termites which are living and moving within these pathways. However, it is highly unlikely to permanently kill off the reproductive Queen Termite, which is responsible for populating the colony. This treatment can also be applied for fixtures such as paneling or flooring. Whilst not a long term solution, this type of treatment can slow down a colony’s growth, and manage the colony size, especially when done regularly. This will then extend the useful life of the wooden fixture or object, and it can continue to be used for years. Unfortunately for a full long term solution, the most expedient and effective method of dealing with this type of termite, is to discard the affected piece of wood and replace it with a new one. When replacing, do also ensure that the wood used has been treated for drywood termites either with chemicals or kiln drying.

This species typically nests underground and their colonies can grow to huge proportions, with hundreds of thousands of workers and soldiers. Termites also have a behavior of recruitment, which is to lay down a pheromone trail to attract more worker termites to the source of food. With this, given that the worker termites are feeding a huge colony, once subterranean termites have identified a source of wood within your premises, they can quickly strip it down in a matter of weeks. They are most commonly identified by the presence of mud tubes that they construct across flat surfaces of walls or floors. These are tunnels that they use to travel through the premises. If such tubes are currently active, they tend to be a darker colour due to the moisture level, and when disturbed, soldier termites would usually be seen from the opening of the mud tube. However, where subterranean termites are active beneath the surface of the wood, there can often be no visual cues as well. This is why there exists a number of sophisticated detection methods in the market, beyond just the visual inspection.

This entails the use of a thermal imager to scan internal areas of the premises. Whilst termite trails rarely show up on the scan pictures, the pictures show areas of thermal irregularities, which is to say areas that are cooler / warmer than the surrounding. As cooler spots are typically caused by the presence of moisture either from water seepage or condensation, inspectors will then hone in on these spots for a more detailed visual inspection. This is because the subterranean termites need moisture to survive aboveground, and will therefore be drawn to forage in such spots. Presence of moisture will also cause wood / cellulose sources to degrade, and the termites will then follow the signature combination of carbon dioxide and mold to identify such sources of food for them.

This entails using man’s best friend, a well trained termite detector dog, to sniff out the presence of subterranean termites. Due to their use of pheromones to communicate with each other, subterranean termites have a unique signature scent, that the dog can be trained to hone in on, much like how dogs are used in bomb and drug detection. This method is particularly effective as there is a definitive identification of subterranean termite activity by the dog’s sense of smell. This method also allows detection of the termites even where there are no visual cues, as the dog detection is done by smell and not by sight.

Once subterranean termites are effectively identified, there are a few treatment options available to building owners and home owners.

This is the most immediate but also the most short term solution. It involves treating the active termite spot with a chemical spray / powder. This will immediately address the termites that you can see on the surface and just beneath the wood, as the chemical will kill them off quite quickly within a matter of days. However, bearing in mind that the colony lies deep underground, such a method can only address those feasting on the immediate spot, and sooner or later, more termites from the home base of the colony will emerge elsewhere in the vicinity

Most commonly used by construction companies in the pre-construction stage of the building, this method entails dredging the soil of the site with gallons of termiticide chemicals in an attempt to kill off any colonies within that plot of land. This is effective in the event the chemical achieves deep penetration of the soil, and the colonies can be reached. Even if the colonies cannot be reached, having the termiticide in the soil will kill off any termites crawling through the treated soil in an attempt to reach the building.

However, this treatment method has its limitations as well as such chemicals often do not last very long under the hot and humid climate in Singapore. Additionally our clayey soil type makes it challenging for the chemicals to achieve deep penetration of the soil via percolation, as the soil tends to already be very moist.

This type of treatment entails the application of a physical barrier to termites, the most popular of which is a marine grade stainless steel mesh that is too fine for termites to penetrate. Application of this involves zero chemicals, and this can only be applied before the construction of the foundational slab of the building. However, its efficacy depends heavily on the expertise of the applicator, as the mesh will need to be applied around all services that come up through the base slab including piping and cabling. Given the small size of the termites, the mesh will need to be applied seamlessly to each of these items. However, when properly applied, the mesh should provide excellent long term protection of the building from attacks by subterranean termites from underground.

This is one of the most effective methods of eliminating subterranean termites, as it targets the entire termite colony. The system does so by feeding the colony a typically non-toxic bait, that contains an insect growth regulator. Instead of poisoning the termite, it simply prevents the termite’s body from synthesizing proteins critical for its survival. Within a few weeks to a month, the termite is then killed. Due to the slow acting nature of the bait, the termites do not associate the deaths with the bait, and will continue eating it and sharing it around the colony. In so doing, the termite bait can and will eventually eliminate the entire colony.

There is a wide selection of baiting systems in the market, each with its own bait formulation and bait dispersal system. Typically one would look for a system that employs a termite bait with a formulation that is very attractive to termites, promoting faster consumption. The dispersal system should also integrate feeding stations both above ground along the visible mud trails, as well as buried in the ground around the building. This then encourages the colony to take the bait from as many feeding points as possible, thereby speeding up the elimination process. The presence of feeding stations installed in the ground on the building’s external perimeter will also help to ensure that should the building be targeted by future colonies operating in the area, they would hit the feeding stations before making it into the building.

However, the limitation of the baiting system is that it requires a highly skilled operator to deploy it successfully. Issues such as bait contamination by other pest control chemicals, or poorly applied or formulated bait can severely impact the efficacy of such systems.

Tackling termites is a tricky business, and it is no wonder that the average building / home owner is befuddled with the sheer volume of different methods and different species available in Singapore. Fundamentally the treatment method needed varies with the type of termite, so it is critical to first make a definite identification. Once the species is identified, then a decision can be made on a long term or short term solution to the termite problem. Most importantly, one should take note of what to look out for when selecting a suitable pest manager to address the issue.

Termites control: What you need to know